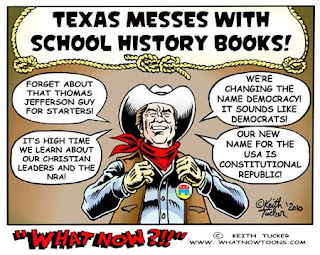 Move over Arizona, Texas is about to be slapped with a boycott too. The Texas school board is set to vote on transforming school history books into right-wing propaganda that glorifies Joe McCarthy and the Confederacy too. Yippee, more crazy old white men in history books! Here's a surprise, the Texas School Board is comprised of 10 Republicans and 5 Democrats. That's 5 sane people and 10 raving lunatics! It does not look good. Folks may have to homeschool their kids in order to save them from the lunatics. Where do all these lunatics come from? Gawd, I wish we could bribe some faraway country to take them all away:
At the center of the furor is that many of the amendments exclude or revise various pieces of accepted history in favor of versions provided by conservative groups or leaders. One amendment, for instance, requires that students learn about the "communist infiltration in U.S. government" in the 1950s, with board head Don McElroy saying Sen. Joseph McCarthy's controversial hunt for American communists at the time had been "vindicated" in the ensuing decades. Another would require teachers and textbooks to refer to the capitalist system as the "free enterprise" system. Capitalism, the board's Republican bloc agreed, is a pejorative term used by "liberal professors in academia."

Of special interest to Jealous and the NAACP are several amendments whitewashing Civil War history and attacking black culture. In addition to voting to remove hip-hop from a high school history study of musical genres, the board also voted to require students to learn the ideas expressed in Confederate President Jefferson Davis' inaugural address. . . One proposal that ultimately proved unsuccessful would have had students learning that the civil rights movement created in African Americans "unreasonable expectations for equal outcomes."


Politics Texas School Board Rightwing Lunatics News
Posted by egalia at 2:20 AM