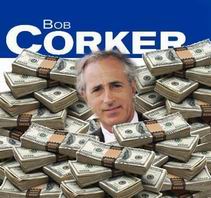 Bob Corker, the GOP nominee for Bill Frist's senate seat, is being sued for turning a wooded nature preserve into Wal-Mart's trashy backyard and profiting off the deal. During his term as Mayor of Chattanooga, Corker's real estate company collected $4.7 million off the deal!

They call Corker 'a self-made millionaire.' The jury's still out, but Tennessee tax-payers may have helped Corker accumulate some of those millions.

Once again, we are forced to ask: What is it about the Republican Party that attracts hordes of greedy and unprincipled candidates? Oh, I forgot, the GOP is The-World-Revolves-Around-my-Wallet Party.

We can hardly wait to see the next poll.

CHATTANOOGA -- Once a place where neighborhood kids caught bugs and hikers admired birds and wildflowers, this wooded nature preserve along South Chickamauga Creek now is littered with trash and overgrown with weed-choked trails.

"I used to bring kids with school groups out here and do environmental programs to highlight the value of wetlands," said Kurtz, an environmental educator. "It's grown up now because our volunteers can't get to it anymore."

Kurtz and other activists unsuccessfully fought plans by Corker's private companies for a now-thriving Wal-Mart Supercenter, built in 2003 in this protected watershed. Now, three years later, the controversy is roiling again, just as Corker heads toward the home stretch in his bid for Tennessee's open U.S. Senate seat.

A lawsuit by Kurtz that Corker's lawyers had succeeded in getting dismissed has been reinstated, and, just last week, a judge issued an order that keeps private some records connected to the suit.

The controversy is spinning off new allegations.

"What they did was outrageous. They just ran roughshod over this public property for private gain,'' said Joe Prochaska, an attorney representing Kurtz and the Tennessee Environmental Council.

The site was dedicated for public use in 1996 by a company Corker later bought. He owned the company in 2003 at the time of the Wal-Mart development.

As mayor, Corker should have disclosed his interest in the property and the adjacent land where the Wal-Mart was built, Prochaska says. "Why did he allow his monetary interest to trump his commitment to the people of Tennessee?'' the lawyer said. . .

The suit, which names Bright Par 3, the City of Chattanooga, the Corker Group, Osborne and others as defendants, seeks restoration of the conservation easement and unspecified money damages.

Rook at dkos has more -- and thanks to William!