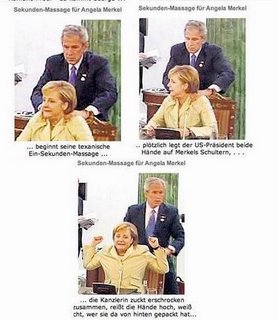 "George W. Bush comes into the hall ... Merkel converses with her desk neighbour, not noticing Bush approaching from the rear ... The US president suddenly puts both hands on Merkel's shoulders ... begins his Texan Massage..."

What is wrong with this fucking retard? Why is the beast boy laying his hands on Chancellor Merkel?

And you thought male privilege was oppressive. Try Presidential Privilege.

So much for Chancellor Merkel. Turns out she's just a girl like the rest of us.

She's a sexual being. She serves at The President's Pleasure.

He's the Boy King. He's the Male Intrusion. So what if his invasive paws aren't invited? He's fucking entitled.

Already I can hear the rightwingers. She likes it. She's asking for it. They have a special relationship. He gazed into her eyes. He didn't mean anything by it. He's entitled.

What fucking bubble was this fucking retard raised in?

DocStrangeLove has more, bigger, and creepier photos. Look at the discomfort on the men's faces. Americablog and Daily Kos have discussions. Here's a video, German captions, and German headlines with exclamation marks!

"It's safe to say the former chancellor never got the treatment Merkel received from the president.

Entering the meeting room, as relayed by a Russian television camera, Bush headed directly behind the chancellor, reached out and, placing both hands on the collar of her gold jacket, gave her a short massage just below the neck.

Cuz she fucking likes it!

She likes it.
Bush and Merkel are famously friendly with each other.
Bush - a hands-on guy!
Bush Gives Merkel Affectionate Squeeze
Well, They Wanted Another Clinton...

Both Joe and I were touched inappropriately by President Bush.
WTF is wrong with him?
What women want
The Idealistic Pragmatist quotes an editorial in the Märkische Allgemeine: While his fellow leaders were sitting at the table at the opening meeting, he came and caressed Angie's shoulders. She reacted as if it had been a natural disaster.
Wandering Hands
Roving Hands
Bush gropes Chancellor Merkel
Bush Gropes Germany's Merkel
Bush attempts to assert quasi-sexualized dominance over an international leader.