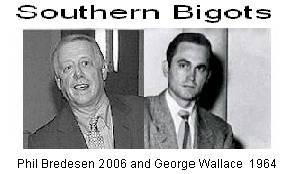 Governor Phil Bredesen (D) says he will vote for the Tennessee Hate Amendment when it appears on the ballot this November.

Gov. Phil Bredesen on Tuesday said a constitutional amendment to ban gay marriage in Tennessee may be "overkill," but he nevertheless plans to vote for the measure in this fall's election.

The Democratic Governor declares the passage of Amendment 1 to be a done deal: "The only question is whether it passes by 85 percent or 95 percent."

Phil Bredesen and the other supporters of Amendment 1 hope to write discrimination into the state constitution by forever outlawing gay, or same-sex marriage.

This is not the first time Governor Bredesen has courted the rightwing vote.

Among his many betrayals to the values of the Democratic Party, Bredesen has compared Medicaid to socialism. Bredesen has permitted the Choose Life license plate legislation to become the law of the land. (The ACLU is pursuing a legal appeal.)

Phil Bredesen has enough money and enough Republican support to win his re-election this November. Obviously, Bredesen has no need for the votes of liberals, and he shouldn't get even one.

The Democratic Governor of Tennessee supports Republican values - let the Republicans vote for him.

Liberals in this state have better things to do, such as joining the Vote NO on Amendment 1 campaign and supporting the Tennessee Equality Project.

Hat tip to C.E. Petro at Thoughts of an Average Woman via Knoxviews.

Related Posts: Gay Marriage - Not on the People's Priority List
Who's Missing in Action in the Gay Marriage War?