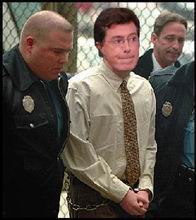 Washington, DC (APE) - Comedian Steve Colbert was taken into custody early this morning by Department of Homeland security officials. Colbert will be charged with leaking sensitive government information according to a Homeland security spokesperson. Colbert was apparently at the annual White House correspondents dinner when he disclosed information sensitive to the security of the country according to officials. A quick search of the Internet revealed that references to Colbert's appearance this weekend appear to have been quickly and effectively expunged from all mainstream media outlets, perhaps a sign of the Bush administration's pledge to deal quickly and effectively with leaks.