Lawmakers Failed to do Homework on Shame Law 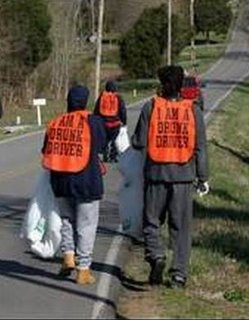 Pictured here is one of the first crews to wear the "I AM A DRUNK DRIVER" vest, as required by the new law that became effective in Tennessee on January 1, 2006.

After the law took effect, Governor Bredesen signed an executive order to form a 12-member task force to study the state's DUI laws.

Could this mean that state lawmakers did not do their homework before passing the new DUI law?

The Tennessee Sheriff's Association has requested that the law be suspended until July, 2007, because lawmakers failed to provide the necessary $250,000 needed to begin to enforce the law.

"The old law required a 48-hour stint in jail for first offenders who are 21 years or older: the new law calls instead for 24 hours in jail and three eight-hour shifts wearing orange "I am a Drunk Driver" vests and picking up trash."

And, no, the new DUI law was not sponsored by Stacey Campfield. Sen. Charlotte Burks (D-Monterey) and Rep. Charles Curtiss (D-Sparta) sponsored the Shame Law.

In a related story, a Clay County judge has been arrested and charged with "drunken driving."

No word yet on whether the judge will get to wear the shame vest.