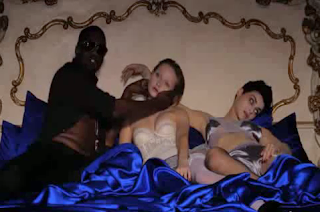 Here we have black men desperately trying to be 'badder' or superior to white men in the category of sub-human misogynists.

If a woman depicted black men in a similar fashion, she'd be lucky to retain her life, never mind her career. But misogyny ain't hate speech in a woman-hating culture. The depraved so-called men in this woman-hating video are Kanye West, Rick Ross and Jay-Z:

Expect to hear boys singing along to it soon. This is the message they are imbibing:

Women are slaves and bitches who can service a man’s sexual needs, even in death. Men are brutal and dominant, and have no empathy for women. Men enjoy dead women as sex and entertainment. The female body is to be devoured, reduced to the same status as meat. Female bodies should be displayed before men as a great feast for their consumption.
Hanging from the rafters in stiletto heels, standing rigid in lingerie, expired on a bed. The white women in these scenes are depicted as subordinated to the black man, reminiscent of the pornographic representation of black men who love to ravish white women, to tarnish and spoil their ‘pure’ bodies.

Limp, floppy, rendered powerless these doll-like bodies retain their seductive, sexual allure. Sure, they might be dead. Sure they can’t consent. Sure they wanted it.

The clip is not only interested in fetishizing female bodies – it revels in fetishizing female pain, female passivity, female suffering and female silence. The ultimate female is the quiet, passive female – a mannequin – who accepts violence, abuse and suffering while remaining hot and sexy. And the creators of this feast of violence will probably win a ton of awards and commendations and sponsorship deals from major companies.

From the 'Petition to Prevent the Official Release of Kanye West's Women-Hating-Monster-Video:'

The victims in this video are clearly women. Only women. And the men, Kanye West, Rick Ross, and Jay-Z are far from bothered by the female corpses. They seem to enjoy being surrounded by lifeless female bodies, apparent victims of a serial killing.

We call on Universal Music Group and MTV to combat violence against women by refusing to support, promote, and/or give airtime to West's "Monster" video. Please add your name to the petition.

This is a preview of the soon to be released sick video: