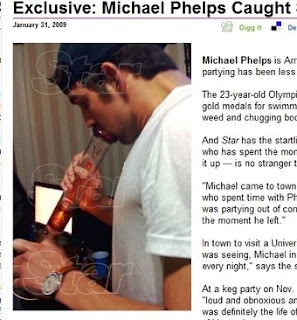 Certifiable South Carolina Sheriff Leon Lott is hot on the trail of all the kids who were at that party where Michael Phelps and the bong were spotted. Eight of them have been arrested!!! I'm sure Sheriff Lott and the Richland County Sheriff's Department have solved all the murders, rapes, and robberies.

Way to go Sheriff Lott! Here's to putting Olympic gold medal winners and kids who party in prison! Because South Carolina has an abundance of money to spend on hunting down kids who party with Michael Phelps.

And Michael Phelps? Will he be next?

We've now learned that since investigators began trying to build a case, they've made eight arrests: seven for drug possession and one for distribution. These are arrests that resulted as the sheriff's department served search warrants.

Phelps is not one of those charged at this point, but the sheriff's department has strong evidence that matches the photo to the house on Blossom Street.