The Obamas Choose a 'Girly' Dog 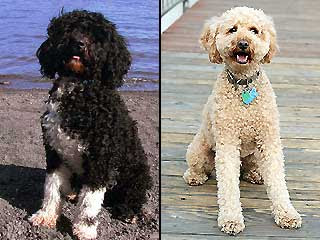 The Obamas have decided to adopt either a Labradoodle or a Portuguese water dog.

It was only two months ago when Barack Obama suggested that he had no use for a 'girly' dog. Sounding like Arnold "Groper" Schwarzenegger, Obama made it clear that he was searching for a 'real man' dog.

Seriously people, using 'girly' as a pejorative term, meant to express disapproval and contempt for anyone or anything thought to resemble a girl, is sexist and offensive when the Republican Governor of California does it. And it's sexist and offensive when Democratic President-elect Obama does it. The fathers and brothers of girls like Malia and Sasha should already know that!

Michelle, still trying to save her husband from himself, pronounced the dog “cute.” Barack wasn’t buying it. “It sounds kind of like a…a girly dog,” he said, at which point his wife pointed out, “We’re girls. We have a house full of girls.”