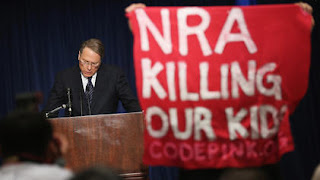 The solution to violence in schools? Guns in every school! Armed guards at the gates!

And no, the NRA did not volunteer to pay for armed guards at the nation's gadzillion schools.

As they say on Current TV, why not just lock the kids up in the nation's gadzillion prisons?

The guns are already there.

We're still wondering if armed guards will ride shotgun in every school bus. Will armed guards  accompany the kids who walk home from school everyday? Will they be there for field trips?

The NRA spokesman defended assault weapons, called for a national registry of the mentally ill, but not gun owners, and railed against the media for "demonizing" the NRA, or poor little gun owners everywhere.

This is the NRA we know and loath:

I call on Congress today, to act immediately to appropriate whatever is necessary to put armed police officers in every single school in this nation. And, to do it now to make sure that blanket safety is in place when our kids return to school in January.