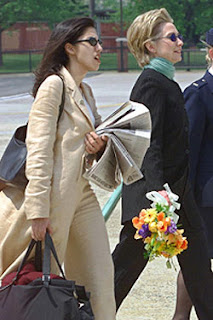 Huma Abedin has been Hillary's loyal 'right-hand woman' since Hillary's days as First Lady. When asked about the Loathsome-Republican-Slime attacks on her longtime aid, Huma Abedin, Hillary replied:

Leaders have to be active in stepping in and sending messages about protecting the diversity within their countries. And frankly, I don't see enough of that, and I want to see more of it. I want to see more of it, and we did see some of that in our own country. We saw Republicans stepping up and standing up against the kind of assaults that really have no place in our politics.

As always, Hillary has class. Too bad Michelle Bachmann has such difficulty staying out of the loathsome slime club.