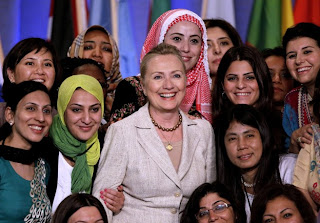 The goal of the State Department’s Women in Public Service Institute?

The goal of the program is to make sure women make up 50 percent of the world’s elected leaders by 2050.

Thank you, Hillary!!  She was at Wellesley College where the subject of  Hillary as future Ms. President was again introduced. She was asked if a woman president would result in fewer wars:

“If you get elected as the next president,” began Bothaina Ahmed Attal before she was interrupted by cheers. “As a woman president, we’ve seen lots of wars in our region. Will we have less of that?” “You can’t make generalizations that simply having a woman in a high office means you’ll have a different policy, but you can say that having many women involved in the governments of countries means that many issues important to women will be on the agenda,” Clinton replied. Clinton steered clear of saying whether she would run for president again. She did not say no, but she did say she hopes to live long enough to see a woman in the Oval Office.