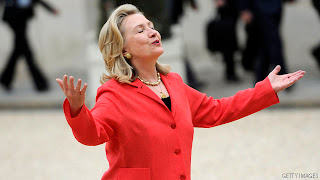 Pollsters call her "the most popular national political figure in America today," but she's still not running for president. America had its chance and blew it. Unless, of course, Obama decides to refrain from seeking a second term.

Nearly two-thirds of Americans hold a favorable view of her and one-third are suffering a form of buyer’s remorse, saying the U.S. would be better off now if she had become president in 2008 instead of Barack Obama.