Maria Shriver Is Surprised that Womanizer Arnold Schwarzenegger Is A Cheater 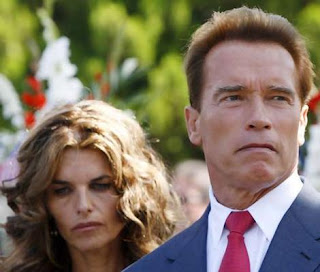 Move over John Edwards. Back in 2003, when Maria Shriver was defending hubbie Arnold Schwarzenegger from allegations of sexual harassment by at least a dozen women, Schwarzenegger had already cheated on her and fathered at least one child. When will women learn?

Maria Shriver moved out of her home in Brentwood after Arnold Schwarzenegger admitted to fathering a child with a longtime member of their household staff, reports the Los Angeles Times. Although the power couple only announced their separation last week, the paper says Schwarzenegger told his wife earlier this year, after the staff member, who worked for the family for 20 years, retired in January. The child was conceived a decade ago.

During California's 2003 recall election to replace Gray Davis, it was Shriver who came to her husband's defense amid allegations from a dozen women who said he had groped them over a number of years. She vouched for Schwarzenegger's personal integrity, helping him win a landslide election.

Update: Our Boy Media had a big clue back in 2003 when Schwarzenegger was running for Governor: The alleged existence of the out-of-wedlock son, including his name and his mother's name, was reported by the London Daily Mail in 2003.