Shut Down the Fraternities 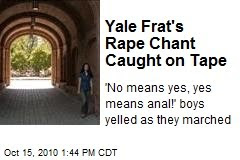 An excerpt from Ms. Flanagan's riveting testimony (Wall Street Journal Op-ed - trigger warning!) on the need to shut down the fraternities that serve as campus rape headquarters:

The Greek system is dedicated to quelling young men's anxiety about submitting themselves to four years of sissy-pants book learning by providing them with a variety of he-man activities: drinking, drugging, ESPN watching and the sexual mistreatment of women. . . It is against this boorish cartel that 16 Yale students and recent alumni asserted themselves in a Title IX complaint brought against the institution last month—a complaint that could cost the university $500 million in federal funds.

Can the mere presence of slur-chanting fraternity men really create an environment that robs young women of equal opportunity to education? Yes, it can. . .

If you want to improve women's lives on campus, if you want to give them a fair shot at living and learning as freely as men, the first thing you could do is close down the fraternities. The Yale complaint may finally do what no amount of female outrage and violation has accomplished. It just might shut them down for good.