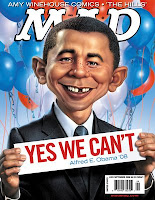 Paul Krugman expresses the now familiar frustration over our Democratic President's despicable habit of embracing the Republican agenda and defining the center as somewhere between the right and the far right.

"[T]he nation wants — and more important, the nation needs — a president who believes in something, and is willing to take a stand. And that’s not what we’re seeing."