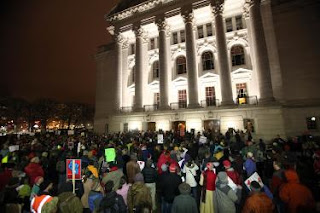 Wisconsin's sneaky Senate Republicans found a way to pass their infamous union-busting bill without the Democrats. They've stripped the unions of collective bargaining rights without the previously required quorum and one-term Governor Walker is itching to sign it.

This makes me furious and I don't live in Wisconsin!

According to CNN (video), the Capitol was deserted at the time of the sneaky vote, but has since filled with and been surrounded by angry voters. Wisconsin Republicans have sealed their fate. No doubt about it, it is going to get ugly in Wisconsin.

Donate to the Recall of Republican state Senators in Wisconsin by contributing to the Democratic Party of Wisconsin.

The scene inside the Capitol after the union busting bill was passed:

Boycott of businesses that supported Walker gains steam on Facebook