Geraldine Ferraro, the first woman to run for Vice President on a major party, died today at age 75. Ferraro had hoped to live long enough to see the day when a woman will serve as President or even Vice President of male-dominated America, but no one lives that long. [via] 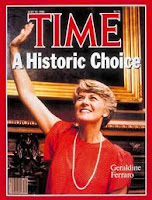 "For two centuries, candidates have run for president. Not one from a major party ever asked a woman to be his running mate -- until Walter Mondale." -- Geraldine Ferraro

"The only thing that can stop Hillary becoming the next president would be smears and dirty tricks. I've told her I'll go anywhere and speak any time to make sure that doesn't happen." -- Geraldine Ferraro