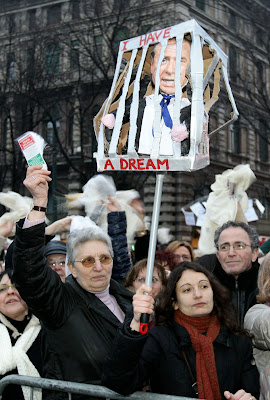 “Italy is a sexist country and the situation is intolerable.”

Approximately one million women demonstrated in more than 230 cities and towns across Italy yesterday. The women included nuns and prostitutes. Many banged on pots and pans. The fed-up women called for the resignation of their deeply sexist prime minister. “Resign you old pig,” read one sign. And the women called for an end to the deeply misogynistic male-dominated aspect of their culture.

Now can we please try this in our own deeply misogynistic male-dominated culture? Excerpts from various news sources follow. For some reason, the media is paying attention (videos).

"Women in this country are denigrated by the repeated, indecent and ostentatious representation of women as a naked sexual object on offer in newspapers, televisions and advertising," said protest organizer Ida Poletto, a married hotel manager who has two sons. "It's intolerable." 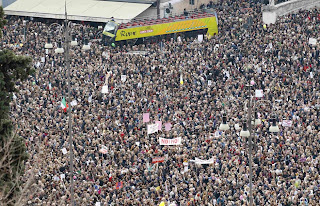 “If women’s representation in society is decided through wild parties, there will always be suspicion over the ways women reach their positions” said Flavia Perina, a member of the organising committee and a parliamentarian who last year joined more than 30 defectors from Mr Berlusconi’s party. 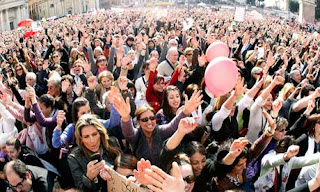 Women protested across Italy this weekend, chanting “Italy is not a brothel,” to call for the resignation of Prime Minister Silvio Berlusconi.

The protesters say Berlusconi’s treatment of women—most recently on display in the investigation of whether he paid for sex with an underage nightclub dancer—undermines women’s dignity and reinforces outdated gender stereotypes. . . Thousands of protesters marched in Naples and Palermo, and other protests took place in more than 200 cities, led by actresses, politicians, and other prominent women and organized through an online petition. "We are asking all women to defend the value of our dignity, and we are asking men: If not now, when?" organizers said on the protest website. 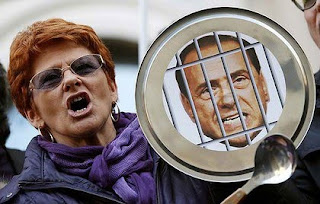 "We are defending the dignity of women," read a placard held up at one of the rallies in Palermo, where thousands of women marched through the city. "Berlusconi has long shown a violent contempt for women with his misogynist remarks." . . More than 50,000 women have signed the movement's manifesto in just a week. It denounces "the indecent, repetitive representation of women as a naked object of sexual exchange" in newspapers, advertising and on television. It also said that macho sentiment in Italy has become "intolerable".

"Our problem is semantics. A prostitute sounds much more elegant when you call her an ‘escort,' and by adding the word ‘domestic' to violence makes it sound much sweeter," she told the cheering crowd. "But we must remember what these degradations mean at the core. They are calling us moralistic to diminish us. But we are here."