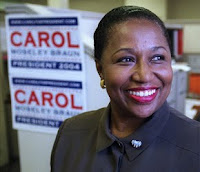 There is now only one African-American candidate in the Chicago mayoral race, but only after considerable pressure from black leaders such as Jesse Jackson. That one black candidate is former Senator Carol Moseley Braun.

No doubt said leaders understood that adding gender to race would be an advantage in the race against Barack Obama's favorite candidate Rahm Emanuel. Carol Moseley Braun is a liberal and a feminist who has been involved with the National Organization for Women (NOW) since 1992. She also has a strong record of supporting LGBT rights. While in the Senate she took a stand against both the “don’t ask, don’t tell” policy and the Defense of Marriage Act.

Congressman Danny Davis, who has since dropped out of Chicago's mayoral race and endorsed Carol Moseley Braun, is only one of the black leaders who has warned Bill Clinton that if he comes to Chicago to campaign for Emanuel, he will harm his relationship with blacks. In fact, the outcry against Clinton campaigning for Emanuel has been so great among blacks that it virtually guarantees that Barack Obama will NOT be campaigning in his hometown for his homeboy Rahm Emanuel.

This is going to be a very interesting race.