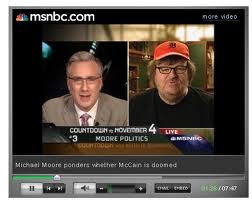 Michael Moore and Keith Olbermann are hard at work hurting the progressive movement by spreading mistruths about the Julian Assange rape case. Is this another case of male bonding gone astray?

Defending your alleged-rapist buddy by dismissing the woman's story as "hooey" is bad enough, but spreading bizarre and untrue claims like 'in Sweden rape means having sex without condoms' makes both of you look and sound like vile misogynists posing as progressives.