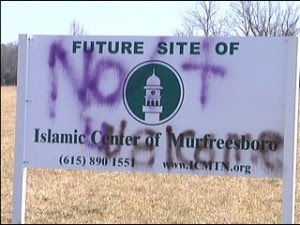 Yet more scary fear and loathing of Muslims in Murfreesboro, Tennessee. The small uptight college town is 35 miles from Nashville:

Ben Goodwin of the Rutherford County Sheriff's Department confirmed to CBS Affiliate WTVF that the fire, which burned construction equipment at the future site of the Islamic Center of Murfreesboro, is being ruled as arson.

Special Agent Andy Anderson of the federal Bureau of Alcohol, Tobacco, Firearms and Explosives told CBS News that the fire destroyed one piece of construction equipment and damaged three others. Gas was poured over the equipment to start the fire, Anderson said. . .

"No mosque in Murfreesboro. I don't want it. I don't want them here," Evy Summers said to WTVF. "Go start their own country overseas somewhere. This is a Christian country. It was based on Christianity."