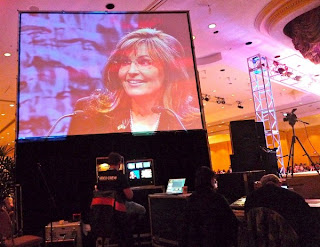 Sarah Palin spoke here in Nashville last night. Her speech was covered by every major cable news channel in the country. Media representatives from all over the world swarmed down on Nashville.
The only other person who can get this kind of coverage on a Saturday night is President Barack Obama. The woman speaks and the media obsesses, writhes and moans, all the while insisting that the woman is stupid, but f**kable.

The latest cycle of obsessive reporting about Sarah Palin includes hilarious charges that Palin is a dummy because she was spotted at the podium with "crib notes" on her hand.
As to exactly how many notes will actually fit on the palm of the human hand, critics ignore this question and actually suggest that Sarah Palin's hand held the answers to all the questions posed to her on the Nashville stage. (!) The internet is littered with photos clearly proving that Sarah Palin is stupid because the words "Energy", "Tax" and "Lift American Spirits" were written on the palm of her hand. Ahem, that's 5 words. It's not clear how those outraged over crib notes consisting of 5 words rationalize President Obama's reliance on the teleprompter. It is clear that the more the media obsesses over her, the more powerful she grows. Seriously folks, is this how an empire crumbles? Is this what 'fiddling while Rome burns' means?
Meanwhile the New York Times notes that Sarah Palin sounds increasingly like a presidential candidate, and 'dummy' that she is, she wields an absolutely stunning amount of power.

Without leaving home, Sarah Palin will be able to reach much of her political base, courtesy of a soon-to-be-built television studio in her living room paid for by her newest media patron, Fox News. From her house in Wasilla, Alaska, Ms. Palin also sends missives to 1.3 million Facebook “fans,” writes newspaper columns, Tweets and signs copies of her book for donors.

. . Ms. Palin represents a new breed of unelected public figures operating in an environment in which politics, news media and celebrity are fused as never before. Her growing cast of advisers and support system could be working in the service of any number of goals: a presidential run, a de facto role as the leader of the Tea Party movement, a lucrative career as a roving media entity — or all of the above. Whether she ever runs for anything else, Ms. Palin has already achieved a status that has become an end in itself: access to an electronic bully pulpit, a staff to guide her, an enormous income and none of the bother or accountability of having to govern or campaign for office....

... Ms. Palin is quietly assembling the infrastructure of an expanding political operation....

Ms. Palin has also enlisted a small team of policy counselors to guide her through the substantive areas in which many deemed her to be lacking in 2008....
Photo via Instapundit