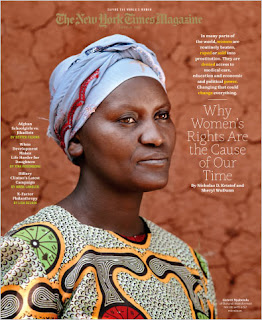 The New York Times Magazine is a must-read this week. The special issue -- Saving the World’s Women -- is chock full of stories devoted to gender equality. The stories I've read so far:

A New Gender Agenda, an interview with Hillary Clinton: "I happen to believe that the transformation of women’s roles is the last great impediment to universal progress — that we have made progress on many other aspects of human nature that used to be discriminatory bars to people’s full participation. But in too many places and too many ways, the oppression of women stands as a stark reminder of how difficult it is to realize people’s full human potential."

Questions for Madame President: People didn’t think it would happen in Liberia because we are a poor, war-torn country that they thought required a man and a macho person — but the women showed differently, and I must say that I hope we’re proving them wrong.

The Daughter Deficit: It is rarely good to be female anywhere in the developing world today, but in India and China the situation is dire: in those countries, more than 1.5 million fewer girls are born each year than demographics would predict, and more girls die before they turn 5 than would be expected. . Millions more grow up stunted, physically and intellectually, because they are denied the health care and the education that their brothers receive.

The Power of the Purse: Remember the concept of “sisterhood”? That quaint relic of an idea that women owed it to other women to crash through ceilings and navigate a male world? It just might be taking new root in a most unexpected place — among women with money. . these givers are more likely to use their wealth deliberately and systematically to aid women in need. . Behind all this giving lies the theory that helping women and children is the way to change the planet.

And the awesome cover story is by the authors of Half the Sky, Nicholas Kristof and Sheryl WuDunn -- The Women’s Crusade: IN THE 19TH CENTURY, the paramount moral challenge was slavery. In the 20th century, it was totalitarianism. In this century, it is the brutality inflicted on so many women and girls around the globe: sex trafficking, acid attacks, bride burnings and mass rape. . . The world is awakening to a powerful truth: Women and girls aren’t the problem; they’re the solution. . .
It has long been known that a risk factor for turbulence and violence is the share of a country’s population made up of young people. Now it is emerging that male domination of society is also a risk factor; the reasons aren’t fully understood, but it may be that when women are marginalized the nation takes on the testosterone-laden culture of a military camp or a high-school boys’ locker room. . Indeed, some scholars say they believe the reason Muslim countries have been disproportionately afflicted by terrorism is not Islamic teachings about infidels or violence but rather the low levels of female education and participation in the labor force.