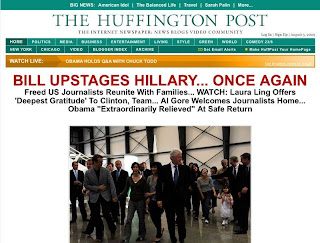 While many of us celebrate the fact that this country is very fortunate to have leaders as wise and good-hearted as Hillary and Bill Clinton, there are some who are never happy unless they are tearing people down.
Taylor Marsh to the Huffington Post:
I also shouldn't have to tell you that running a headline blaring "BILL UPSTAGES HILLARY.... ONCE AGAIN" on a day two journalists lives were saved from doing twelve years hard labor in a North Korean prison camp made Huffington Post look silly. Petty. Small. You screwed up.

"It took great self-confidence for Hillary Clinton to send her husband without worrying about the small, vicious people who would second- guess her decision to allow her husband to take center stage again." -- Lanny Davis

Update - Paul Krugman: "People who can’t get over the Democratic primary even though their guy won. Today’s Huffington Post . . ."