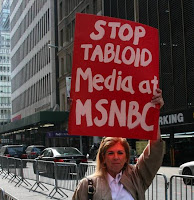 Governor Palin suggested in her resignation speech that she is quitting in order to better defend herself and her family. It looks like the woman is serious.

The day after her resignation, Palin's legal counsel issued a very strong warning to media outlets on the subject of the 24/7 defamation of Sarah Palin.

[S]everal unscrupulous people have asserted false and defamatory allegations that the “real” reasons for Governor Palin’s resignation stem from an alleged criminal investigation pertaining to the construction of the Wasilla Sports Complex. . Just as power abhors a vacuum, modern journalism apparently abhors any type of due diligence and fact checking before scurrilous allegations are repeated as fact. . .

To the extent several websites, most notably liberal Alaska blogger Shannyn Moore, are now claiming as “fact” that Governor Palin resigned because she is “under federal investigation” for embezzlement or other criminal wrongdoing, we will be exploring legal options this week to address such defamation. This is to provide notice to Ms. Moore, and those who re-publish the defamation, such as Huffington Post, MSNBC, the New York Times and The Washington Post, that the Palins will not allow them to propagate defamatory material without answering to this in a court of law. The Alaska Constitution protects the right of free speech, while simultaneously holding those “responsible for the abuse of that right.” Alaska Constitution Art. I, Sec. 5. http://ltgov.state.ak.us/constitution.php?section=1. These falsehoods abuse the right to free speech; continuing to publish these falsehoods of criminal activity is reckless, done without any regard for the truth, and is actionable.