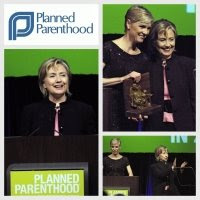 Quote of the Day

“A society that denies and demeans women’s rights and roles is a society that is more likely to engage in behavior that is negative, anti-democratic and leads to violence and extremism.”
-- Secretary Hillary Rodham Clinton,
Planned Parenthood Federation of America’s
national conference in Houston

“A society that denies and demeans women’s rights and roles” . . . it's unfortunate that Hillary is not merely describing the savagely patriarchal nations across the sea. But doesn't she have a diplomatic and inclusive way of talking about America the Patriarchy?

Secretary Clinton was speaking at the Planned Parenthood conference after she was honored with the organization’s highest honor -- the Margaret Sanger Award.

No woman can call herself free who does not own and control her body.
-- Margaret Sanger
Feminist Politics Hillary Clinton News Gender Reproductive Freedom Women's History
Posted by egalia at 9:51 AM