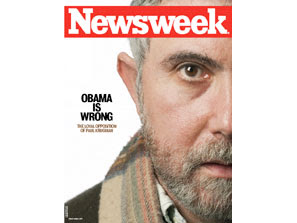 Paul Krugman -- who as far as I can see is right about everything -- is on the cover of the forthcoming Newsweek. The choice of the cover story -- Obama’s Nobel Headache -- is explained in a letter to readers by Newsweek Editor Jon Meacham. He writes:

“Every once a while, … a critic emerges who is more than a chatterer—a critic with credibility whose views seem more than a little plausible and who manages to rankle those in power in more than passing ways. As the debate over the rescue of the financial system—the crucial step toward stabilizing the economy and returning the country to prosperity—unfolds, the man on our cover this week, Paul Krugman of The New York Times, has emerged as the kind of critic who, as Evan Thomas writes, appears disturbingly close to the mark when he expresses his ‘despair’ over the administration’s bailout plan. …

“There is little doubt that Krugman—Nobel laureate and Princeton professor—has become the voice of the loyal opposition. What is striking about this development is that Obama’s most thoughtful critic is taking on the president from the left at a time when, as Jonathan Alter notes, so many others are reflexively arguing that the administration is trying too much too soon.

"A devoted liberal, Krugman hungers for what he calls ‘a new New Deal,’ and he prides himself on his status as an outsider. (He is as much of an outsider as a Nobel laureate from Princeton with a column in the Times can be.) Is Krugman right? Is the Obama administration too beholden to Wall Street and to the status quo, trying to save a system that is beyond salvation? Does Obama have—despite the brayings of the right—too much faith in the markets at a time when prudence suggests that they cannot rescue themselves? We do not know yet, and will not for a while to come. But as Evan—hardly a rabble-rousing lefty—writes, a lot of people have a ‘creeping feeling’ that the Cassandra from Princeton may just be right. After all, the original Cassandra was.”

Newsweek COVER STORY: THE ECONOMY Obama’s Nobel Headache: Paul Krugman has emerged as Obama's toughest liberal critic. He's deeply skeptical of the bank bailout and pessimistic about the economy. Why the establishment worries he may be right.