So Long Bush, Rush Limbaugh Is the New Face of the Republican Party 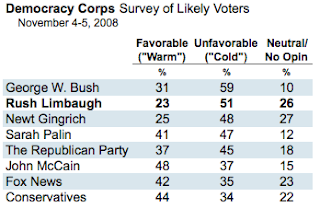 Here we have toxic Bush and toxic Limbaugh. By comparison, everyone else looks warm and lovely. I'm not sure what happened to all that post-partisan lovey-dovey stuff, but the Dems are attacking Rush like he's Bush and it feels like we're back in that two-year election campaign we thought would never end. Ah yes, politics in the U.S. , by any other name we'd call it doing the same stupid thing year after year after year after . . .

"Americans United for Change, a liberal group, will begin airing radio ads in three states Obama won -- Ohio, Pennsylvania and Nevada -- with a tough question aimed at the GOP senators there: Will you side with Obama or Rush Limbaugh?"