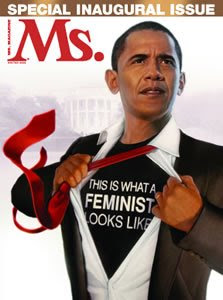 This is what a feminist looks like?? File this one under: Does Feminism Even Need Women? While progressives lament and metaphorically pull their hair out over the sad fact that President-elect Obama is not a progressive, not a liberal, the easy to please feminists over at Ms. Magazine put Barack Obama on the cover and gush like teeny-boppers that Obama is some Feminist Super Man who will, presumably, save us little wimin.

I must have been asleep when the self-identified feminist and Wonder Woman presidential candidate Hillary Rodham Clinton and her claws made the cover of Ms.

Periodically, there are many many many problems (Jon Favreau, Larry Summers, Rick Warren, etc.) with a liberal feminist magazine proclaiming Barack Obama to be a feminist, starting with the fact that he is Not even a liberal, and he has never publicly identified himself as a feminist. (Michelle has rejected the term.) And then there is the undeniable fact that a feminist president would have far more than a pitiful 5 women in his/her cabinet. 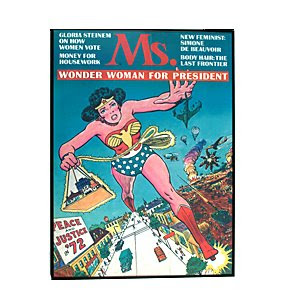 I will be overjoyed if Barack Obama proves to be a feminist or pro feminist president, but this preemptive and gushing teeny-bopper declaration that he is one -- on the cover of Ms. Magazine -- should be an embarrassment to feminists everywhere.

Amy Siskind at The New Agenda (and Daily Beast): It is time that we take back the term “feminism” and restore its dignity and honor. It is time that we, our daughters, and granddaughters discover our inner Wonder Woman. And, for those of us who dream, maybe Ms. and the former national women’s movement will return in the sequel as Superwomen once again.

Feminist Law Professors: This seems designed to mock people who supported Hillary Clinton during the Democratic Primary. Why does Ms. want to do that now?

Heidi Li's Potpourri: This is the person who has retained Jon "The Groper" Favreau as his chief speechwriter; installed Tim "I'm not really for serious guarantees of Roe v. Wade" Kaine as the DNC Chair; appointed far fewer women to his cabinet or to cabinet-level positions than Bill Clinton did and barely the number that George W. Bush has.

AnnieNYC: Where have all the feminists gone.

The New Agenda: If “This is What a Feminist Looks Like” (see below), is NOW now open to a male president?

Hillary's Village: oh, the irony of picturing a feminist as a superMAN.

The New Agenda: Yes, we are aware of Ms. Magazine cover…. And no, it is not a hoax. Apparently, the Special Offer also includes a 18″ x 24″ poster - no joke.

Peacocks & Lilies: Apparently this is what prostitution looks like.

Riverdaughter: And women like Hillary will be completely forgotten as the true workhorses and champions of women’s rights.