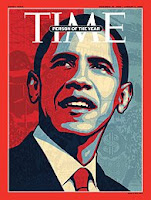 Another year, another man on the cover of TIME magazine. This year was easy on the men at TIME because the cover appears to be just another one of the scadzillions of Obama graphics released by Obama and his hyper-capitalist fans during the Obama campaign. Obviously, TIME's cover looks like somebody did a quickie copy and paste number on one of the Obama Hope posters, or one of the 'cool cats' posters.

TIME's cool cats tradition of naming a Man of the Year began back in 1927. In all these years, there have been four (4) individual women named as TIME's 'Man of the Year.' Yeah, I know, that's four more women than the number who have served as Madame President of this cowboy country.

The name of TIME's sexist tradition was changed from Man of the Year to Person of the Year in 1999, but the last time a woman was named was in 1986. But hey, according to the men at TIME, one woman -- Sarah Palin -- was a 2008 runner-up. And on TIME's list of 17 "People who mattered" in 2008, there are actually six (6) women "who mattered." And the 6 women who mattered, according to the men at TIME: Ingrid Betancourt, Hillary Clinton, Tina Fey, Somaly Mam, Stephenie Meyer, and Dara Torres.

Seriously people, this sexist old boy's magazine needs a better name. Man Time? Menz All the TIME? Penis TIMES? Sexist TIMES, Misogyny TIMES? Or how about the AMENZ Magazine? Leave your suggestions in the comments, and we'll vote on them.

The Men at TIME interview Obama for Man Person of the Year: 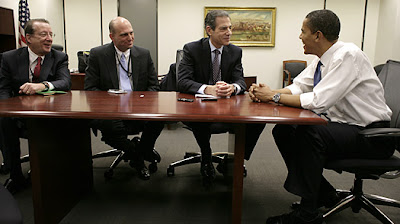 MSNBC: OBAMA APPEARED ON HALF OF TIME'S COVERS
Alan Colmes: Time’s Person Of The Year In Different Persona (via)