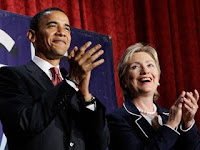 As promised, Obama announced his national security team today of 3 women and 3 men. The star being Hillary Rodham Clinton, of course, destined to become Madame Secretary. Or in the words of President-Elect Obama, Hillary Rodham Clinton is an "American of tremendous stature who will have my complete confidence."

There were some nice moments, but the moment most guaranteed to cause the MSNBC heads to implode was this one:

"As they all walked off stage, Mr. Obama put his arm around Mrs. Clinton and escorted her out while the others tagged along. The entire press conference underscored that, at least for now, Mrs. Clinton is first among equals."

Can Chris Matthews and KO make a high drama soap opera out of that? Of course they can! And then there was the moment when a reporter brought up Obama's primary allusion to Hillary's foreign policy experience as nothing more than girly tea parties. Obama pointed out that the primary battle is over:

“This is fun for the press to try to stir up whatever quotes were generated during the course of the campaign,” he says, batting away the suggestion. He directs reporters to look at the statements that Mrs. Clinton and he have made outside of the heat of a campaign. He says they share a view that America has to be safe and secure and in order to do that “we have to combine military power with strength and diplomacy,” we have to build and forge stronger alliances around the world. “I believe there’s no more effective advocate than Hillary Clinton for that well-rounded view” for how we advance America’s interests around the world.

He went on to cite her service on the Armed Services committee, she knows world leaders and she and he have discussed the “strategic opportunities” that exist out there to strengthen American’s posture in the world. “She’ll be an outstanding Secretary of State,” he says, “and if I didn’t believe that, I wouldn’t have offered her the job and if she didn’t believe I’m equipped to lead this nation, she would not have accepted.”

The above is from Katharine Q. Seelye who live blogged the event, she has lots more. Here's Hillary:

Transcript: Obama's National Security Team Announcement
Fox News shut out again at Obama press conference.
It Hurts To Be John Kerry Today
How is it Obama can fill a Cabinet faster than NBC can replace Tim Russert?
memeorandum