Oh, The Tea Parties Hillary Will Give 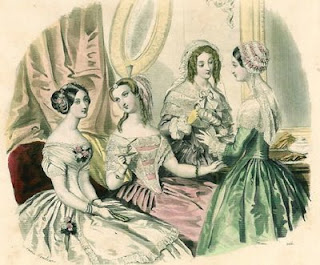 As Secretary of State, I guess Hillary Rodham Clinton will be throwing tea parties like nobody's business. As we learned back in the primary, because men have no comparable experience to that of a First Lady, it counts for next to nothing when you're running for president. Presidents do important things; their wives attend tea parties.

Trivializing Hillary Rodham Clinton's experience as First Lady, including her longstanding relationships with world leaders, and her visits to "refugee camps, clinics, orphanages, and villages all around the world," was one of the many deeply sexist weapons the male candidates and their followers fired at the brazen woman candidate, and at all women.

But if it weren't for the insufferable patriarchal tradition of trivializing the life experience of women, we would have had our first woman president a very long time ago. And the world might not be such a harsh place for so very many women and the families we care for.

Historiann takes this timely opportunity to review "one of the most condescending smears" thrown at Hillary "by the Democratic presidential candidates and their supporters during the primary race." I highly recommend reading Historiann's entire post. Here's a teaser:

With news reports everywhere confirming that Hillary Clinton will accept Barack Obama’s offer to serve as his Secretary of State, it seems like the perfect time to reflect on one of the most condescending smears deployed by the Democratic presidential candidates and their supporters during the primary race: that Hillary Clinton’s service as First Lady didn’t give her any meaningful experience with foreign affairs of diplomacy, and that it could be reduced to simply drinking tea with diplomats and the wives of foreign leaders.

Late last year in the thick of the leadup to the Iowa Caucus, Chris Dodd said, “To somehow suggest having been the First Lady is the kind of experience that qualifies you to be president, I’ve never heard that argument before.” Obama, in touting his foreign policy experience, said “It’s that experience, that understanding, not just of what world leaders I went and talked to in the ambassadors house I had tea with, but understanding the lives of the people like my grandmother who lives in a tiny hut in Africa.”