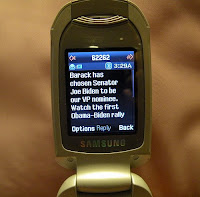 If we do actually see a record-breaking rise in the number of young voters today, one reason will surely be that Obama has their cell numbers, and he is texting them.

** A NEW GOTV WEAPON: TEXTING. Barack Obama’s campaign has systematically culled millions of mobile phone numbers for the last 22 months. Today, all those folks, many of them young voters, are getting get-out-the-vote text messages from Obama.

“Barack Obama is reaching a generation that is trying to change the world in 160 characters or less,” said David All, a political consultant who advises Republicans on Internet strategy.


Obama Counts on Text Messages to Drive Turnout of Youth, Blacks
Turning out, everywhere
Networks May Call Race Before Voting Is Complete
Reuters/C-SPAN/Zogby Poll: Final: Obama in Double-Digit Lead, 54% to 43%