Outside the Meet the Press studio yesterday, Colin Powell issued a powerful condemnation of the election season lunacy, or the self-destructive nature of U.S. elections (see video below).

I was especially pleased to hear Powell shoot down the lunatic charges that Barack Obama is a socialist.

If Hillary Clinton were the Democratic nominee, accusations that Obama is an anti-American Muslim socialist who pals around with terrorists would be replaced by charges that Hillary is that nagging anti-American socialist bitch who murdered Vince Foster.

In fact, in many instances, Republicans have merely pulled out their volumes of dusty old propaganda regarding Hillary's "left wing blonde . . Swedish" ideas and inserted Barack Obama's name where once Hillary's name was.

Right-wingers have been calling Hillary Rodham Clinton "the Red Queen" for a very long time (and hateful Democrats joined them back in that mind-rape of a misogynistic primary). They called her a radical socialist long before she confirmed it in their conservative minds by authoring: It Takes a Village, a book which suggests that we are all responsible for the well-being of the nation's children. If that's radical socialism, go ahead and put me over there in the liberal pinko commie column. I mean, I'm a mom. And if, like the Red Queen, you also believe that all children (all women and men too) should have the right to life-saving health care, then you too are so obviously a flaming socialist. 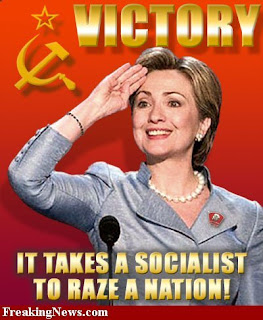 Colin Powell's condemnation of the small-minded lunacy of the reigning political discourse came right after his endorsement of Barack Obama. Some conservatives cry that Powell's endorsement is racially motivated. Sorry, I don't buy it. While there are many complex reasons behind voters' preferences, the one Very Large Elephant in the room is the plain and simple fact that Republicans have been systematically wrecking this country for eight long years. Like Colin Powell, I see no credible reason to believe that a McCain presidency would deviate from that self-destructive path. In this nervous breakdown of a country, we all have problems. Democrats are certainly no exception, but at least they aren't Republicans.


"Taxes are always a redistribution of money. Most of the taxes that are redistributed go back to those who pay it -- in roads and airports and hospitals and schools -- and taxes are necessary for the common good, and there's nothing wrong with examining what our tax structure is and who should be paying more, who should be paying less. And for us to say that makes you a socialist I think is an unfortunate characterization and is inaccurate."
-- Colin Powell
"(Hillary) Clinton has merely updated the old and discredited (except among socialist dictators) Karl Marx saying: "From each according to his ability, to each according to his need."
-- Cal Thomas, 2007
Barack Obama John McCain Colin Powell News Hillary Clinton Socialist Red Queen Politics Socialism Health Care
Posted by egalia at 10:00 AM