Debate Drama: How About if Nader & McKinney Stand in for McCain? 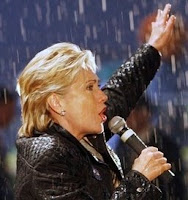 The pundits are going wild with the idea of an empty chair debate. Obama would show up, debate the empty chair and win! That doesn’t seem fair. How about if Ralph Nader and Cynthia McKinney stand in for John McCain? Do you think Obama could handle it? We could have a debate about some real issues for a change. Single payer, for starters.

And now the McCain camp is talking about postponing the VP debate. Did John McCain hear the rumor about Obama's October Surprise? The one where Joe Biden steps down AFTER the VP debate so that Hillary can win this thing? And no, that wouldn't be any stranger than anything else about this bizarre election.