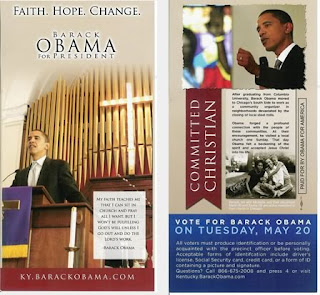 Death penalty, guns, campaign finance reform, FISA, NAFTA, and now Church and State. What exactly is so new about Obama's New Politics? It's getting harder and harder to remember what Move On ever saw in this guy.

Many of us saw this one coming, what with Obama's Christian campaign flier smacking us upside the head. But it still hurts. And why do I expect that many of the same "progressives" who relentlessly bashed Bush for giving money to God, will now find new and creative ways to defend the same policy under Obama?

The AP report below contains a line that defines Obama as okay with religious discrimination in hiring and firing - which is unconstitutional, but nevertheless happens all the time here in the Bible Belt. Subsequent reports suggest that WORM is that Obama is not okay with unconstitutional discrimination. Obama will tell us more today when he delivers a speech on Faith in America.

AP: CHICAGO - Reaching out to evangelical voters, Democratic presidential candidate Barack Obama is announcing plans to expand President Bush's program steering federal social service dollars to religious groups and — in a move sure to cause controversy — support some ability to hire and fire based on faith. . .

Rev. Barry Lynn, executive director of Americans United for Separation of Church and State, criticized Obama's proposed expansion of a program he said has undermined civil rights and civil liberties.

"I am disappointed that any presidential candidate would want to continue a failed policy of the Bush administration," he said. "It ought to be shut down, not continued." [via]