The FISA Capitulation Vote, Barack Obama, and These Orwellian Times 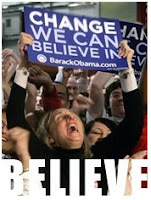 Update: Bush is on CNN crowing about the passage of his FISA bill. Obama did not vote 'present.' As promised, Barack Obama voted for Bush's FISA bill. Hillary Rodham Clinton voted against the shredding of the Bill of Rights. Final vote: YAYS 69 NAYS 28. Bush thanks you and the rest of the spineless Dems, Senator Obama.

If you can believe it, there are actually some Democrats who are refusing to join presumptive 'leader' Barack Obama in his FISA Capitulation vote to continue the Bush policy of shredding the Bill of Rights.

No word yet on how Hillary Rodham Clinton will vote, but Newsday reports: