Women Stand Up for Hillary 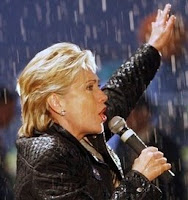 Women respond to the loud bullies in the male-biased media, who are so devoted to The Chosen One, by standing up for Hillary with full page ads across the country. Not So Fast, the full-page ad in yesterday's USA TODAY reads:

Hillary's voice is OUR voice, and she's speaking for all of us.

We are the women of this nation. We are rich and poor, young and old, married with kids, married without kids, single moms, gay, straight, and widowed. We are every color. We are of every religion. We are from all political parties.

We love our country. Now more than ever, so much of what we cherish is at risk – our homes and our health, our safety and our planet, our children and our values. We raise our voices, in one glorious, defiant chorus, to tell the world that these times demand strength, courage and vision.

And that is why we stand united in our unwavering support for Hillary Clinton.

The ad was paid for by Women Count PAC, a newly formed political action committee which is running similar ads across the country. Women Count was created "to ensure that the 51% of American citizens who are women have their values and votes counted in the political process." via Riverdaughter


video via The Red Queen

Act Now: Sign Hillary’s Petition to DNC, Pass It On!