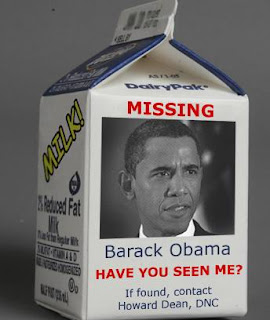 "I have personally contracted with Dean’s milk company and we are putting Obama’s picture on a carton of milk."
-- Terry McBrayer,
Kentucky Superdelegate

Referring to Obama's months long absence in the state of Kentucky, McBrayer was speaking at a "raucous reception" for Hillary Rodham Clinton at a Kentucky Democratic Party fundraiser. Hillary supporters cheered. Obama supporters booed. Watch it on the video clip.

If Obama views it as pointless to campaign in the Kentucky and West Virginia primaries, why would he bother showing up in the general?

Barack Obama Missing in Kentucky
The only Democrat to win the state of Kentucky since 1976 is Bill Clinton. Bill won Kentucky in both 1992 and 1996, as he did Tennessee.

The graphic is from Lambert, as is the compelling question: So, since Obama's not campaigning in WV and KY, does that mean he gets half the delegates?

Race-baiting Obama supporters will be deleted and banned, just like the sexist and classist ones.