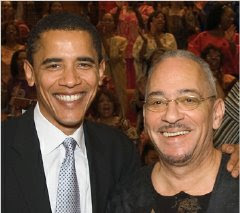 Some of us call the act of digging into the background and associations of presidential candidates a necessary and crucial step in the democratic process. We call it vetting the candidate.

Josh Marshall calls it dirty politics. And while he does not come out and explicitly blame Hillary for actually purchasing the DVDs (anyone can purchase them) of Reverend Jeremiah Wright's controversial sermons, Marshall blames Hillary for the fact that we have actually heard the words of Wright's sermon. The pastor of Obama's African-American Church delivers sermons that involve race, and Marshall pontificates that race would not be a topic of discussion in this historic primary if not for that EVIL Bitch.

Some accusations are so laughable, they hardly deserve a response. But suffice it to say: the only people who can afford to ignore, or wish away, the inconvenient subjects of race and gender are white men like Josh who are effectively the generic race and gender. And if Josh Marshall was not so firmly entrenched in Obamaland, the blogger would be asking: Why has the media waited so late in the primary season to address the controversy of Obama's close and 20 year relationship with the radical Reverend Jeremiah Wright?

If Obama's the nominee, we will see no end of this kind of stuff. And there's probably some small benefit of getting a preview. But the simple fact is that we wouldn't be seeing this stuff now if it weren't for the fact that this is the kind of campaign Hillary Clinton's campaign has decided to wage -- often directly and at other times indirectly by not reining it in in her supporters when it crops up on its own. Wright is news today because Ferraro's been news yesterday. Are her comments racist? That's a loaded, too copious, word. And there've been cases where the Clinton team has gotten a bum rap on these matters. What I do know, however, is that Clinton's campaign and her surrogates have injected the subject of Obama's race into this campaign too many times now for it to be credible to believe that it is anything but a conscious strategy.

Jeremiah Wright: God Damn America
"I don't think that my church is actually particularly controversial."
- Senator Barack Obama, 3/08
ABC News: "The Wright issue is not going away for Mr. Obama. The campaign of Sen. John McCain sent out the WSJ op-ed this morning to reporters. His views will be painted as radical and anti-American, and Obama will be asked which ones he agrees with and which ones he doesn't."