Backlash: PA Poll Finds Only 53% of Hillary Voters Will Vote for Obama 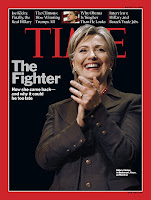 The new Franklin and Marshall poll in Pennsylvania finds that only 53% of Hillary's voters say they will vote for Obama should he actually become the nominee. (poll - pdf.) A survey of this blog's readers had a remarkably similar result.

I chalk this up to sheer rage and frustration over the countless insults hurled by Barack Obama at Hillary and her supporters, even though Barack Obama is said to be so 'above the fray' and all. At every opportunity, Obama makes the point that His campaign is Clean and Pure while Hillary's campaign is Dirty and Nasty. He's honest, she is not. For some incomprehensible reason, Obama fails to recognize how very dirty it is for him to say that.

And then there's the male-dominated media's absolute refusal to acknowledge in any way whatsoever that Hillary Rodham Clinton's bid for the presidency is every freaking bit as historic as Obama's! But the menz just don't think so. Women are their wives, not their Commanders-in-Chiefs. What is wrong with Bill Clinton? Doesn't he know this?

And then there is the non stop media hatred of the woman's sheer audacity!

Hillary leads Barack Obama in Pennsylvania by 51-35 percent. "She leads among young voters, wealthier voters...voters in virtually every demographic group, with the exceptions of Philly voters and non-whites."

"I am confident I will get her votes if I'm the nominee. It's not clear she would get the votes I got if she were the nominee."
-- Barack Obama
Hillary Clinton Pennsylvania Barack Obama Democratic Primary News Politics Media Misogyny Voter Backlash
Posted by egalia at 5:46 PM