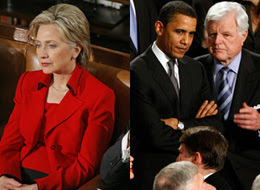 Obama said that he turned away when Hillary approached him only because Claire McCaskill asked him a question. But according to the photographic evidence, at that "precise moment" Claire McCaskill was clapping her hands, her mouth was closed, and she was, um, looking at Hillary.

First there was the snide snub at the debate. I cringed when Obama talked down to Senator Clinton like he was some insufferably snotty teenager: "You're likable enough, Hillary."

Then there was the SOTU snub. And now we learn of "The Snub" Before "The Snub": Senior Obama staffers rejected proposal for their candidate to sit with Clinton at State of the Union. Leading Democrats wanted rivals to sit together for the sake of party unity.

Clinton was willing, but Obama chose to sit with newly-minted supporter Ted Kennedy.

Obama strategist David Axelrod to The Page: “No such invitation ever came from Senator Clinton. Had [she] made such a proposal, we would have adjusted our plans.”

Inside Edition on the Obama Snub

Photos of The Snub
Obama Snubs Hillary at SOTU