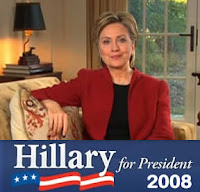 Among the many noted strengths of Hillary Clinton are "her abiding, powerful intellect" and her proven ability to win over "skeptical voters." What is often forgotten or ignored by critics is that the New York Senator possesses a proven track record of winning over the staunchest of Republicans in upstate New York.

The New York Times judges Senator Clinton thusly: "We know that she is capable of both uniting and leading." None of this is news to those who have followed Hillary Clinton's career more closely than they have followed right-wing rhetoric and/or the traditional media assaults aimed at all Democratic front-runners. Wisely, in my view, the paper urges Senator Clinton to "take the lead in changing the tone of the campaign."

Both skeptics and supporters should read the full editorial. Here are some of the highlights:

[W]e are hugely impressed by the depth of her knowledge, by the force of her intellect and by the breadth of, yes, her experience. . . [She] has won the respect of world leaders and many in the American military. She would be a strong commander in chief.

She has shown a willingness to learn and change. Her current proposals on health insurance reflect a clear shift from her first, famously disastrous foray into the issue. She has learned that powerful interests cannot simply be left out of the meetings. She understands that all Americans must be covered — but must be allowed to choose their coverage, including keeping their current plans. . .

The potential upside of a great Obama presidency is enticing, but this country faces huge problems, and will no doubt be facing more that we can’t foresee. The next president needs to start immediately on challenges that will require concrete solutions, resolve, and the ability to make government work. Mrs. Clinton is more qualified, right now, to be president.

We opposed President Bush’s decision to invade Iraq and we disagree with Mrs. Clinton’s vote for the resolution on the use of force. That’s not the issue now; it is how the war will be ended. Mrs. Clinton seems not only more aware than Mr. Obama of the consequences of withdrawal, but is already thinking through the diplomatic and military steps that will be required to contain Iraq’s chaos after American troops leave. . .

She is the best choice for the Democratic Party as it tries to regain the White House.