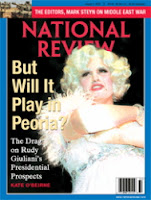 In a smokey dark pseudo Christian room, homophobe and misogynist Pat Robertson was persuaded to forget all that he stands for and endorse Rudy Giuliani. Folks, this is as serious 'a deal with the devil' as I've ever seen.

Robertson said: "I thought it was important for me to make it clear that Rudy Giuliani is more than acceptable to people of faith." And at least Rudy's not a goddamn Mormon, Robertson meant to say.

Robertson will be selling Rudy on the Christian Broadcasting Network. Christians will be told that the issues they stand for are not all that important anymore because the terrorists bloodlustful Muslims are gonna' get 'em unless they vote for the deceptive crossdresser!

Rudy the Crossdresser is now the only one who can save the Christians from the Muslims. Maybe Robertson can convert 'Crossdresser' into a term of holy religious significance.

Clearly, Robertson is sending a message to those trouble-making fringe Christians. Will Pat Robertson, Dean of Hypocrisy, be able to stop the fringe Christians from striking out on their own and doing something desperate like opposing the devil with a third party candidate?

Deranged Pat Robertson once said that activist judges pose a threat "probably more serious than a few bearded terrorists who fly into buildings."