MSNBC's prime time sexist stream-of-consciousness pundit Chris Matthews got to me last week with his insane rants about Hillary Clinton. Of course, Matthews isn't directing his nightly sexist drivel at Hillary so much as he is directing it at all women.

And the Hardball host has the nerve to accuse Hillary Clinton of playing the gender card:

"I was just triggered into thinking about the number of times Hillary Clinton has yielded herself to this gender card. . Is Hillary right to play the gender card, which she is so vociferously playing today?"

Below are verbatim quotations from Chris Matthews on his MSNBC Harball show (and a few other media hotspots) which serve as examples of msm's routine playing of the very sexist gender card. And I'm sure I've only begun to scratch the surface.

A woman's voice can grate on a man

"We were watching Hillary Clinton earlier tonight; she was giving a campaign barn-burner speech, which is harder to give for a woman; it can grate on some men when they listen to it -- fingernails on a blackboard, perhaps."

She's strident and like a strip-teaser and is she really a mother?

"Bob, I know you're a liberal, but when are -- when is a politician like Hillary Clinton or anybody else going to admit they have the A-word, ambition, and stop with this coy thing about, "I'm so flattered by so much" -- it's just like a strip-teaser saying she's flattered by the all the attention. Hillary is running for president. She wants to be president. What's wrong with saying it?"

"Is she a convincing mom?"

"Another thing Russert pointed out the other night. If you're running on your record as first lady, let's see the records, babe. . . You can't keep playing this "I'm a little girl" thing, and "my husband makes all the decisions" if you're running for president."

"You know what? When she said “I‘m your girl” at that labor debate out in Chicago, when she said, “I‘m your girl,” I thought that was the best line. That was “Cat Ballou.” That was the hot chick—I‘m sorry, the hot woman doing something well... saying, I can beat those guys. But when she gets her husband to come in like this big Teddy bear, saying, Leave my wife alone... I wonder whether he wants her to win or not or he just wants to look like he wants her to win. I don‘t know these people that well."

She's a wife on a short leash

"Let me tell you how short Hillary's leash is. She was asked by you, sir, about whether we're going to get full disclosure of contributors to presidential libraries. And she did not feel that she had the latitude in her husband's absence to give you an answer."

Will she ever stop cackling?

"What do you make of the cackle, Drew? . . Is the cackle killing her? You think it‘s a distraction. What is it? . . We‘ll know if she stops cackling because then we‘ll know it was a tactic. . . If she keeps cackling, we‘ll keep talking about it. So I don‘t think she can win this baby! I don‘t know what to say."

Why is a woman on the debate stage?

"Do you (Sen. Dodd) find it difficult to debate a woman?"

Her behavior is bizarre - but maybe she's like us men

"[S]he's clapping, like she's Chinese. I know the Chinese clap at each other, but what is she clapping at? I mean, it's like one of these wind-up things. Every time you see -- and now she rolls around the room, and sort of, it's like dances with the clapping while she's there. And every once in a while she shoots that pointed finger at somebody, she multi-tasks, she claps and points."

"[A]nd that clapping. I just don't get it. It's not appealing. It's Chinese or something. . . Well, there she is clapping again. I don't whether she's clapping -- would somebody please tell me why she claps every time she goes somewhere?"

"Well, I think she spent too much time watching Richard Nixon in the Great Hall of the People there because she's running around clapping hands like I don't know what. How do you explain that? . . . I think it's bizarre behavior. Anyway, I think it has something to do with - you know, men don't know what to do with their hands. I guess she's like us." 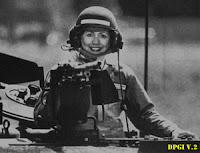 Can she wear a dress in a tank?

"Is [Hillary] Dukakis in a dress?"

Can she be the Commander-in-Chief when we have John Wayne on 'our' side?

"OK, let's put the gender thing in here. I love gender politics, guys. . Kathleen, being surrounded by women, does that make a case for commander in chief -- or does it make a case against it?"

"But isn't that a challenge, because when it comes down to that final decision to vote for president, a woman president, a woman commander in chief, will be an historic decision for people. Not just men, but women as well. . . But we've got Patton and John Wayne on our side."

"You know, somewhere out in the Atlantic Ocean, I think there might be a giant, green, ugly, horny monster. A gigantic, gigantic monster of anti-Hillary, and anti-woman Hillary, anti-liberal woman Hillary, some real ferocious beast out there that says no matter what happens between now and Election Day, they're not going to let her win. There's men, some women, are just not going to let this woman, this woman win the presidency. I don't know whether that monster's out there. All men I meet are afraid to talk like that. You only hear criticism of Hillary from smart, college-educated women. They're the ones that always have a problem with her now."

"You know, men don't knock Hillary that I talk to; it's the women. For some reason, men are being politically careful. They don't want to be caught being . . The crowd I hang with don't want to be caught knocking her, because it sounds sexist, but women are so tough on Hillary. . . Let me ask you, is there a horny-headed green monster out in that ocean that's anti-Hillary or anti-woman that's just hiding down there, waiting for the race to get interesting?"

A special thanks to the great folks at Media Matters!