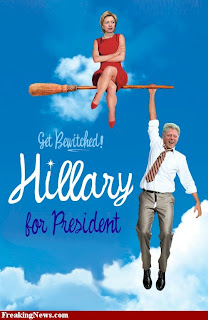 Some Republicans might want to call this a presidential debate, I call it the eruption of a whole lot of anxious white male fear and loathing of a woman in line to take charge.

This was one rabidly he-man affair. And the seething Republican crowd was right there with them.

Mitt Romney said, "I don’t want her as Commander-in-Chief," cuz she's a girl. 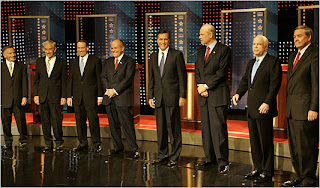 Fox News moderator Chris Wallace gave the cue for the men to beat their hairy he-man chests when he asked:

"Is she fit to be Commander-in-Chief?"

The Republican audience yelled "NO!"

Hillary is NOT fit, insisted Mitt Romney. The Republican went on to suggst that Hillary is just an intern (like Monica).

Rudy said America can't afford "Hillarycare." And Rudy blew a kiss, saying, thank you Florida: "In 2000 you saved us from Al Gore. We're going to need you in 2008 to save us from Hillary Clinton."

McCain said something about the "Democrat Party," and that he was in an actual concentration camp, so there.

No one is real sure what Fred Thompson said. Fred "I'm still fertile" Thompson said that he's reproduced himself five whole times. Therefore, said Fred, I am NOT lazy.

But it was Mike Huckabee who came closest to naming the most serious and unforgivable problem of Hillary's missing penis:

Yeah, right. Elect Hillary and "our military" will be demoralized.

Republicans don’t like women in politics, unless, of course, the women are "hot" and busily fulfilling the wifely duties of supporting Republican men. Conservative men don't want to see women on the same stage with the men. The guys are not ready for equality, not ready to share power with women, and they most assuredly are not ready for a woman who is their Commander-in-Chief. Too effin' bad.