Bush Sneaks into Iraq for Photo-Op

Here's the Commander Guy, dressed all in black so that no one will recognize him as he sneaks into Iraq, courtesy of men with guns, for his third staged photo-op with the most captive and commanded-to-applaud audience in the world (more photos).

The Commander Guy is trying to outwit the Democratic-led Congress by sneaking into Iraq and surprising everyone with this stunning declaration:

We're making progress so we may as well occupy this country forever!

But the really big surprise comes next week when the Commander Guy will reveal his newly informed view of the success or failure of his defiant Surge. 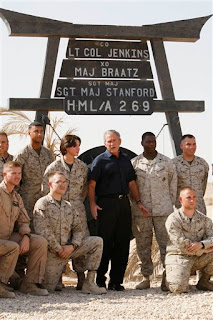 We are all on the edge of our seats wondering what the Moron-in-Chief will have to say about Army Gen. David Petraeus’ Iraq Success Report.

Perhaps this new Iraq Success Report -- reportedly to be written by the White House and read by Petraeus -- will be as memorable as the report we had from President Petraeus roughly one month before the 2004 Bush/Cheney election.