Fred Thompson to Announce on Sept. 6 - Unless He Changes His Mind 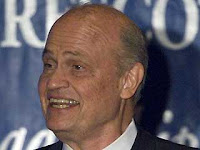 Ladies and Gentlemen -- After three nearly six months of hype and nonsense -- we have a date! Freddy Thompson has announced that he will announce his candidacy on September 6th.

As the Economist says, "So much for an actor's sense of timing."

But what a coincidence. The Republican abortion rights lobbyist will announce just one day too late to participate in the Fox debate.

I guess Freddy's not ready.

And Nashville can forget about watching the former Tennessee senator announce at the Ryman Auditorium. Lawrenceburg can forget it too.

Freddy will do it on the internet -- unless he changes his mind.

Hmmm, so maybe flip-flopping Freddy will really announce on the 5th?