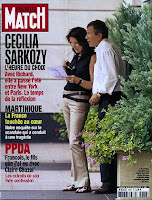 PARIS: The French can be very, well, French when it comes to the personal lives of their leaders.

They take affairs, illegitimate children and tumultuous marriages in stride.

But they suddenly turn traditional when it comes to the role of the first lady. They do not like the idea of Nicolas Sarkozy entertaining world leaders alone at the Élysée Palace. It is not comme il faut.

Maybe that’s why this country is so mesmerized with the question of whether the beautiful Cécilia Sarkozy, a former Schiaparelli model who was for years her husband’s influential political adviser, is going to serve as the chatelaine of the Élysée, or run off again with a lover.

No one seems sure if she will bolt, leaving the entertaining duties to Sarko’s mother, an elegant lawyer, or agree to play a limited role at the palace.

“We have a hard time imagining an intermittent first lady at the Élysée,” sniffed Le Temps, a daily newspaper, online.

Cécilia was missing in action during the final weeks of her husband’s campaign. “I don’t see myself as first lady,” the 49-year-old said. “That bores me.”

Bound by strict privacy laws, and cozy with the elite ruling class, the French press shies away from printing the skinny on relationships, even though the skinny French public loves gossiping on the subject. Trying to fathom what is going on with power couples here is like watching a French movie — scenes brimming with emotion and ambiguity.

Cécilia left Sarko for several months in 2005, moving to America to live with a French events organizer — reportedly a response to her husband’s affair with a French journalist.

When Paris Match published pictures of Cécilia with her lover in New York, Sarko became furious with his good friend, Arnaud Lagardère, the magazine’s owner. Soon, the editor was fired.